In 1995 I was given a book on Sri Sathya Sai Baba which changed my life. After reading it, within weeks I was on a flight to India to see for myself, if indeed this was the Avatar I had been longing to find. 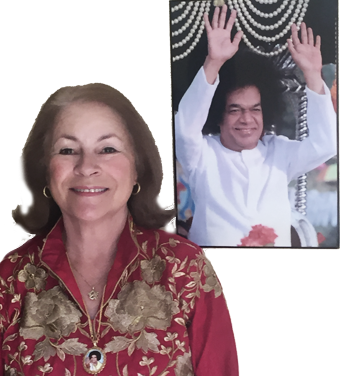 When I arrived in Prasanthi Nilayam, Puttaparthi, South India (Sai Baba’s ashram) I was in no doubt that Sai Baba was THE ONE I had been yearning in my soul for all my life.
That first week in Sai Baba’s ashram was to transform my life into service and offering myself to His mission.
I left my job as a successful business woman in London and shortly after moved to North West Florida to take sick children out to swim with the wild dolphins.
In 2001 I moved back to UK to look after my ailing mother, and set up my first Spiritual Healing centre in Suffolk. I stayed there working as a healer and later became an Inter-Faith Minister.
In 2006 I moved into my present place in Darsham which has been running as a Spiritual Healing Centre ever since.
On 3 April 2016, Sai Baba who is now working in His Light Body, after leaving His body in 2011, declared that my home would be His UK ashram and named it SAI GRACE. Now I am working tirelessly to make sure as many people can come to have satsang in the supreme energy here and leave uplifted and refreshed back to their daily lives. For the past 3 years holy vibuthi has appeared on Sai Baba’s pictures, His chair, Robe, Padukas and plants devotees bring as an offering.